At the Build 2015 day 1 keynote, Alex Kipman (@akipman) announced that they had “hundreds” of HoloLens devices at the event and that attendees could register to have a chance to demo one. As soon as the slide with the registration link went up, the event wifi and mobile carrier traffic exploded with people trying to register before their peers. As you might have guessed from the title of this blog post, I was one of the lucky people who got an appointment.

The confirmation email told me to go to the Intercontinental Hotel (located next to the event). When I got there, it quickly became evident that security was very important to Microsoft. They put my group on the elevator (which was secured by guards) and radioed the 27th floor that we were on our way.

After getting a HoloLens shirt (I live for free shirts so I was ecstatic about this) and a special badge, we were taken to a secure locker room and instructed to leave pretty much all of our personal belongings in a locker. I took off my sweatshirt and loaded my phone, keys, wallet, and backpack in to the locker. Next we got a brief introduction on how to do gestures, they measured the distance of our eyes (for calibrating the HoloLens) and we were ushered in to our own private rooms.

There were two people in the room running the demo. One person doing the talking and another that was sitting quietly on a laptop. I have no idea what the person on the laptop was doing which lead to later speculation among my group of attendees that they were acting as a Mechanical Turk and watching me for gestures and quickly relaying the command to the HoloLens.

The HoloLens fit over my head pretty comfortably. They had a Microsoft logo with a box around it filling the screen and said to adjust it until I could see the whole image clearly. It took a bit of fiddling to get it just right. I got the impression that the pre-release units are very delicate as I was instructed to only touch the strap section and when my hands accidentally got closer to the body of the unit they were very quick to jump in and politely remind me to only touch the strap.

Immediately I noticed that the field of view was small. Instead of being immersed on a holographic experience, you have a box in the middle of your visual field where you can see the holographic overlays. This is completely unscientific, but, it looked something like this: 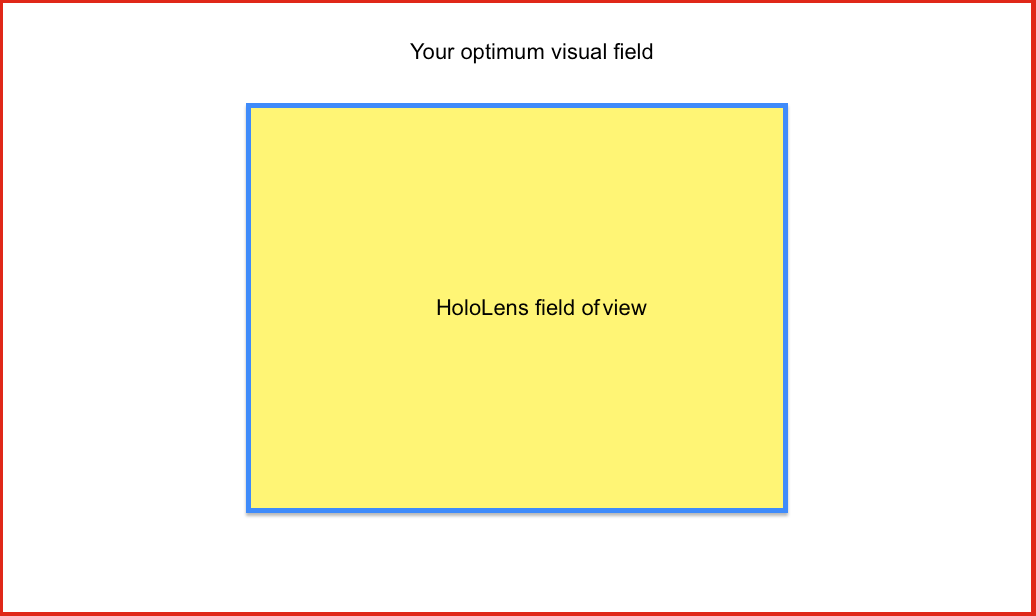 All of the demos came from a virtual toolbox that I had placed on the left hand side of the room. You start the poster demo by pulling a poster out of the toolbox using the “click” command (hold your index finger straight up, and then press down as if you are clicking an invisible mouse button). Next, you issue a voice command to tell the HoloLens to scan the room. The room-scanning sequence was pretty amazing. It shows you what looks like a 3d radar scan / edge detection of the room happening in real-time. Afterwards you are able to place the poster on any surface you want with another click command.

The click gesture worked better than I thought it would. I had a few early clicks that weren’t registered (I think because I had my hand a little bit too low a few times) but after getting the hang of it I could easily and reliably click using my finger.

You pull a small aquarium out of the toolbox and, using the click command, place it on a small table in the room. Next, you issue a voice command to make the aquarium large enough to fill most of the room. From here, you are able to add fish and change their size and direction. Once you have modified the aquarium to your satisfaction, you issue another command to shrink it down to sit on the table again.

You place an X-Wing in the room from the toolbox and are able to paint panels using a paint fill tool. You are also able to walk around and examine it in 3D. Walking around the X-Wing was totally fluid and the model remained perfectly stationary relative to the room as I moved around. After you are done, they show you a model on the laptop that is representative of your customized X-Wing.

The whole time I was using the device I couldn’t keep a huge stupid-looking grin from infecting my face. It felt like using something totally new and exciting. While the small field of view wasn’t quite what I expected, the demo was very impressive and I can’t wait to get my hands on a production unit.